- September 29, 2013
The old dirt pavements near my mother's house in Barnhill are something of significance to me. I tramped these ancient byways as a child, they seemed so much longer then... Tamped down earth with a layer of fine grade gravel on top. I always wondered whether the gravel rose by some kind of gravitational osmosis from the dirt or if it was placed there on purpose. The thing is, the gravel was always there, engrained in knees and palms after a bad fall from a bike or while running wildly from unseen enemies that lurked up in the mansions of Camphill Road.

These old pavements had furrows and grooves worn into them by countless feet over countless years...perhaps even Victorian ones? But still the fine gravel surface persisted. Why was it never blown or washed away by the Scottish deluge of winter? These ever present, slightly muddy paths running alongside the magnificent abodes of that particular neighbourhood. The jute baron playground of Dundee's boom years, the richest square mile in Europe according to some sources.

But today, to my horror, I see the old ways are being dug up and replaced by shiny new asphalt runways. Skateboarders delight.....heaven knows I was one once (I still have a woefully underused longboard festering in the cupboard under the stairs). This march of progress and jobs creation may be seen as a good thing by some, but to be honest those old grit walkways still had a lot of life in them, yes really engrained in them. Generations of Barnhillians have traversed those muddy miles to who knows where. And so it goes, with a glint of sadness in my heart I walk the weary way up to my mother's house with my own children now, bouncing ever so slightly on the springy black pavements...at least I imagine it feels like bouncing. Notice the mossy growth in the damp shade of the wall. 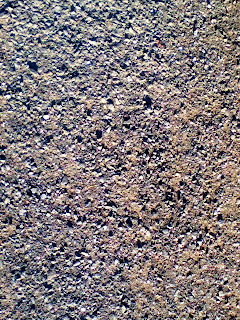 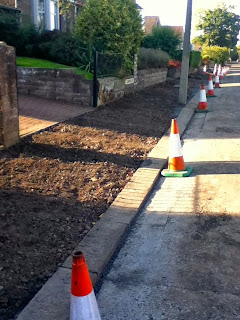 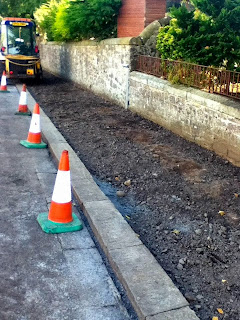 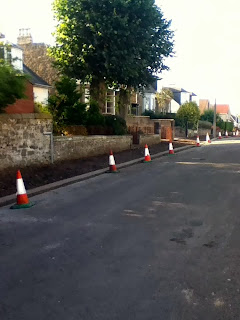 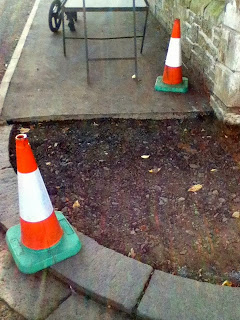 Note the beautiful curved masonry work on these big old wide-scale kerbstones,
at least they've been spared. You can see the edge of the new asphalt there, smothering the earth. 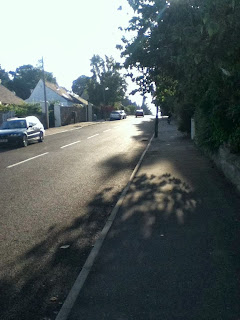