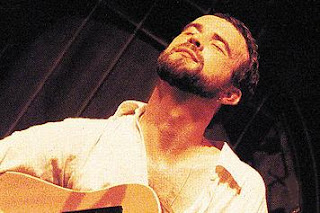 This is a wee thing I wrote just after John died and emotions were running high. Just wanted to share it here since he's been on my mind of late.


It's been a week since Iain McGeachy left planet earth and it feels to me a bit like losing a friend.

Although I never met him, to me he was one of those people who are just always 'there' in the background of your life, almost taken for granted until...one day suddenly they're gone and you realize what they meant to you.

John Martyn's songs first worked themselves into my psyche as a teenager when I was in the throws of emotional turmoil and wonderment. I used to go and see him play live all over the country, wherever I moved to (and I've moved around alot) he would always appear at some point to play a gig, be it solo, duo or with his unceasingly excellent band. As a result, each song I listen to acts like a catalyst bringing a person or situation into my mind, a time and a place, a face and a twinge of emotion.

Personally I like to remember the first time I saw him play 'John Wayne' at the 'Mean Fiddler' London in the mid 80's, an intimate gig, he and the band were just stood on the floor 10 feet in front of me, it was almost frightening in its intensity, I'll never forget it. The Queens Hall in Edinburgh, Just him and Spencer Cousins, John with a huge joint in one hand and a large tumbler of black stuff in the other or the time he arrived late, played about 2 songs then stormed off in a mood...later in a pub around the corner some of the dissapointed crowd spotted him...

"hey John I travelled all the way from shetland to hear you play your songs...

"oh so it's sangs yer wantin' is it?". (I think he used the Scottish accent that night).

He then proceeded to play the entire set acoustically on a bar stool to an enraptured pub crowd.
There was also the time when performing a particularly intimate and spellbinding version of 'go down easy' the last chord hanging in the air around the entranced audience, John perhaps feeling uncomfortable with the emotional tension, let fly with the most enormous belch. Typically irreverent John behaviour.
Sometimes he'd turn up, play a solo gig then afterwards just hang around waiting to see if anyone wanted to go for a drink. I reckon it can be a very lonely life as a gigging solo musician on the road. I Really wish someone had had the courage to go up to him, (put it down to shyness of youth) but he just wandered away into the night, guitar case in hand. The nearest I ever got to John was buying a Jamieson's (with 1 piece of ice) for Alan Thomson after a brilliant gig at Burgess Hill many years later during the 'Glasgow Walker' tour, I remember Alan saying how John only needed a half of lager to be completely out of it, such was his
condition at the time.

And then finally and fittingly, the performance of 'Solid Air' in its entirety at Celtic Connections in Glasgow. John was suffering badly with the flu..or something..

"I don't know wether I'm dead or alive" he declared as he was wheeled on...

incoherent ramblings followed between songs..but he brought the house down when he referred to himself as a living "leg.. end"...I distinctly remember thinking to myself at the time, oh god he looks and sounds really fucked, and I wondered if I'd ever see him alive again. I didn't.

I suppose now, I no longer have to 'worry' about him, and I did worry in latter years, I think we all did. Maybe it's because I lost my own dad to drink a while back or maybe it's because I too was once a youthful curly haired singer-songwriter with an idealistic and over romantic view of the world that I miss John so much, perhaps I see a bit of him in me..he was a hero and a role-model, like my dad a larger than life slightly eccentric Scotsman, or maybe it's because I've absorbed so much of his music into my own work.

At the end of the day tho, he was also just a regular guy..fatally flawed, tortured and searching for release like the rest us...(ok like me), the matter of fact announcement of his death in the Irish Herald last week, listed in the 'M' section reminded me of this fact, and brought a wee tear to my eye at the same time. Aye, death is surely the great leveller.