Haha not a blog about about hi-fi or surround sound plasma screens, oh no no no. Quite the opposite in fact.

These days, with music descending into mp3 hell and non-stop visual entertainment becoming as ubiquitous as chips, people are seeking something REAL! There I've said it now, it's going to be the new zeitgeist, mark my words. Real entertainment by real human beings...in your home (or someone else's).

A few years back, I had the pleasure of attending such an event on a regular basis. Down in Lewes a lass named Aylla used to open her kitchen to all and sundry about once a month and in would come local entertainers of all denominations (including Arthur Brown the god of hellfire and his acoustic guitar). In also would come an appreciative audience, bottles in hands to sit on the kitchen floor drinking and enjoying the feast of homespun music and drama.
The whole place was only about 15 foot square and it could be a bit of a crush...but how great to witness artists wedged between you and the cooker giving it their all. Intimate.

Anyways, years later, 'Aylla's Kitchen' is all but a happy memory. But wait, I see we were not alone.

Here's a couple of sites that point to a resurgence...

First off themoth.org real people telling real stories...to save myself some typing I'm going to steal from my mate Andy's blog:


Just wanted to share my recent discovery of a phenomenon known as "The Moth", an organization founded in New York in 1997 by poet and novelist George Dawes Green, which celebrates the art of live storytelling.

I can also recommend the Alan Rabinowitz "Man & Beast", and Richie DiSalvo's "Anthony The Hat" stories from that same page.

The podcast has some gems too, including NYPD police officer Steve Osborne's "Mug Shot" which is worth listening to for the wonderfully extreme NY accent alone!

I think it's difficult to beat the age old pleasure of hearing real life experiences being shared by "normal" everyday souls...it's refreshing and far more compelling in my view than the synthetic, trashy, formulaic soap operas and dramas we are fed on TV these days (with the exception of quality shows like "The Wire" of course!)

Anyway, this inspired concept has got me thinking about the oncoming Winter nights and the prospect of holding a storytelling evening with a few friends...a nice roaring fire in the grate and a wee dram. Nothing like a little homegrown entertainment! 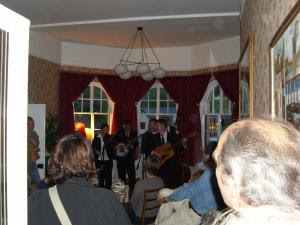 Second site is oriented to live music but it's a similar kind of thing
House concerts are not a new concept but seem to be gaining popularity. Check them out here: