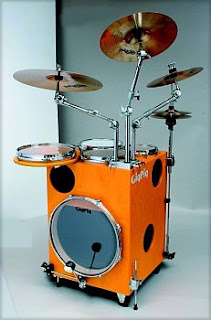 About 25 years ago, before I had a car or could even drive for that matter, I decided I needed a portable drum kit for busking with friends. I based my design on a black plastic dustbin with a lid, several kids snare drums and el cheapo tambourines. The snare and hi-hat assembly strapped onto your leg via a big wide Velcro elastic strip while in the sitting position and the open/close hat was operated by a hoop and string mechanism hanging down to the left foot. The toms where attached separately by a wooden dowel to the short plank that held the snare and hi-hat. The whole lot fitted inside the bin which doubled as a very respectable sounding kik drum. I did actually busk this kit at the strawberry fayre in Cambridge with a couple of pals playing acoustic guitars. We called ourselves 'Colossus'! What a laugh, actually I thought we sounded pretty good. I think my portable kit fell apart shortly after that, but at least it lived for 1 legendary gig.
And now these guys have gone and taken my idea and done it properly. Cost you a grand, but I'm sure it will last longer than mine did, probably sound better too.
'Colossus' may rise again!